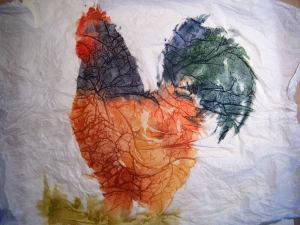 I’m still getting into the habit of taking stage by stage photos of my work, so to start with there may be a few jumps but hope you’ll bear with me! The purpose of this exercise is partly to show that watercolour can be more forgiving than is generally assumed. As you can see it doesn’t look much like a fish but the initial idea was to paint a rooster. I start by placing a piece of tissue over wet stretched khadi paper, onto which I’ve done a sketch of the cockerel, and pressing it down onto the paper to get it ‘fixed’. Then with a large square brush I start blocking in the colours and shapes, spraying and adding puddles of water. What I want is something very loose, the water as well as the tissue add texture and ensure that the paint gets through the tissue and onto the paper. To check if the paint is getting through its worth just lifting the tissue at the corner  to take a peek. Its then left to dry, which can be speeded up by training a couple of anglepoises close to the surface. A hairdryer tends to blow the tissue off. Once dry the tissue is removed 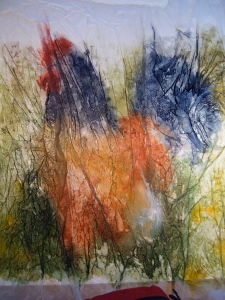 The original intention was to have no background, but having removed the tissue I decided it needed one. So I laid a clean piece of tissue over the image and painted the greens in the same way as the first stage. Once it dried and I’d removed the tissue I had a sinking feeling that it just wasn’t working. This usually takes a while to admit to myself but once I have I put the painting under the shower and wash the painting till whats draining away is pale or clear water. This still leaves a clear image, but what paint is left won’t come off or start looking muddy when I start working back into it.

This is a bit of a jump because I still keep forgetting to take enough photos, but after washing the chicken painting down and letting it dry, I turned the image 90% anti-clockwise and start to gaze at it trying to find a new picture in there. More particularly fish, as I’ve been wanting to paint them for some time. The orange of the cockerels body suggests a goldfish and I can begin to see a possible composition, so starting with the goldfish I block in the shape by painting the dark water around it leaving some of the green areas of the original painting to suggest water lilies, and some of the details of the body. Then the paler blue fish at the top left and another darker blue fish emerging from behind the goldfish’s head which was originally the neck of the cockerel. Most of this is done with a thee quarter inch square watercolour brush, which makes and demands definite bold marks, and can be used on its edge for finer detail or more fiddly areas. The detail of the mouth and the fins I do with a no.10 round brush. Then I let it dry

If you’re needing to loosen up, bigger brushes help, as does holding your brush higher up the ferrule. It stops you from being too controlling and fiddly, something all watercolourists are in danger of being, no matter how long we’ve been practising.

I start to add more detail; more of the pattern on the Angel fish, painting in the eyes, some spots on the fish behind the goldfish’s head, also defining  this fish more by painting darker water around it. I’m trying for a balance between describing and suggesting and merely hinting. I want to keep the disorting and blurring effect of water. If something feels too crisply described I’ll use a small spray bottle to blur the edges.

One thought on “This Will Be Fish”

Travelling across 6 continents over 6 years with a bike, a violin and no commercial flights

a year in uganda
artclassesbrightonandhove

The greatest WordPress.com site in all the land!

A blog about Greece, art, and life in general

Jots from a Small Apt.
Wanderlust Sara
Drawn and Fired

Life is a story, waiting to be told

Art and creativity with a touch of nature

Plein-air pen and wash on paper

Echoes of the Past

Exploration of the Past

Sand and salt under my feet, moon over my head. I am an artist living in Florida. Works available at https://www.Society6.com/sandsaltmoon